Perth has had a slightly complicated history with it's big department stores over the decades. Moving locations, building new buildings and demolishing the old. Some brands even packed up and left only to return years later. These pics are of the old Aherns Department store that was still around until only a decade or so ago when it was bought out by David Jones. Aherns and now David Jones stretches between the Hay st and Murray st malls. The Aherns Arcade, 1950. I don't recall there even being an arcade near Aherns, but hey I wasn't even a twinkle in my dads eye in 1950 so maybe someone else knows something about it. Considering the amount of arcades that currently sit between hay and Murray st then I wouldn't be suprised that there was one. I kind of do remember this entrance, very sixties/seventies. I think this was the facade when David Jones took over in the late 90's or at least a refurbished version of. Janall said…
Some comments. I do remember Aherns Arcade but I seem to think of it being part of Aherns in that it didn't go through to Murray Street. I remember there was a tea rooms there which sold delicious eclairs and a very nice children's wear shop because some of my nice summer dresses came from there. One arcade that many people have forgotten was Central Arcade - near William Street. Another arcade was the Equity Arcade with an entrance in William Street which connected to The Equity store in Hay Street. A similar arcade was Bon Marche Arcade (still there) with an entrance in Barrack Street which connected to Bon Marche store in Hay Street. Bon Marche and Foy and Gibson were the first stores taken over by David Jones but they didn't last. I think the name of the store is Myer not Myers although that's what most people refer to it as.
10:48 pm

My buddy Mike (aka Van) in Melbourne has put a T shirt design up on Threadless T's, do the guy a huge favour and vote for his crappy design will ya ;) nah seriously it's pretty damn fine don't ya think? Give him your vote and he can earn some money and stop living in his car or at least buy some wheels for it so he can move it and then he wont have to keep waking up in the full sun. . Click the pic for the full design and to vote . There was a time when kids didn't have mobile phones. In those wondrous times, the most efficient form of communication between houses was—after rocks, paper planes, and shouting—the good ol' pair of cans and a length of string. . And in every neighbourhood was the girl who lived next door to the boy. The boy said "Helloooo!" and through the distortion of the string, it came out the other end as "I love you!"

ARE YOU A SLUT

Unsure?? Well worry no more, this lil test will determine if you are or aren't. I managed a score of 79% which when I first saw it I went woohoo, but then I remembered the questions and now I'm not so sure it's such a good thing ;o) Anyway take the test and post your score in the comments section of this post. 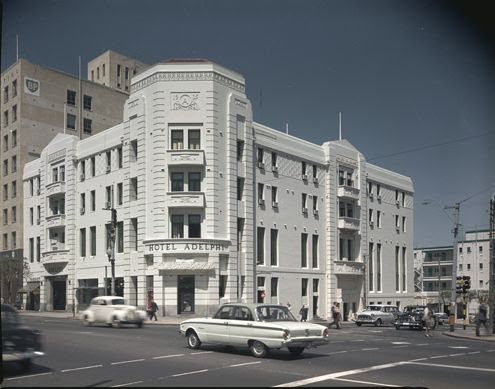 Some of the pubs and hotels that used to dot Perth, some are still here in a renewed form but most are gone forever (I think I have all locations correct?!) oh and I think you'll soon get a bit sad like I am that these were all demolished once you click the links and see what replaced them.....
The Adelphi Hotel, cnr Mill and St Georges Tce.Demolished to build this.

The Palace Hotel, St Georges Tce. Only the facade remains with the hideous Bankwest tower climbing out of its back rooms. I'm not a big fan of facadism, but I guess they at least left something

Hotel Australia, was next door to the old Boans building in Murray st. Demolished to build the Myer Building

The Great Western, still there, you know it as the Brass Monkey

The Bohemia Hotel, now part of the Wentworth Hotel on Murray and William